Whatever you plan, you can
do it with KS-ProjectPlanner Pro
fast, clear and accurate. 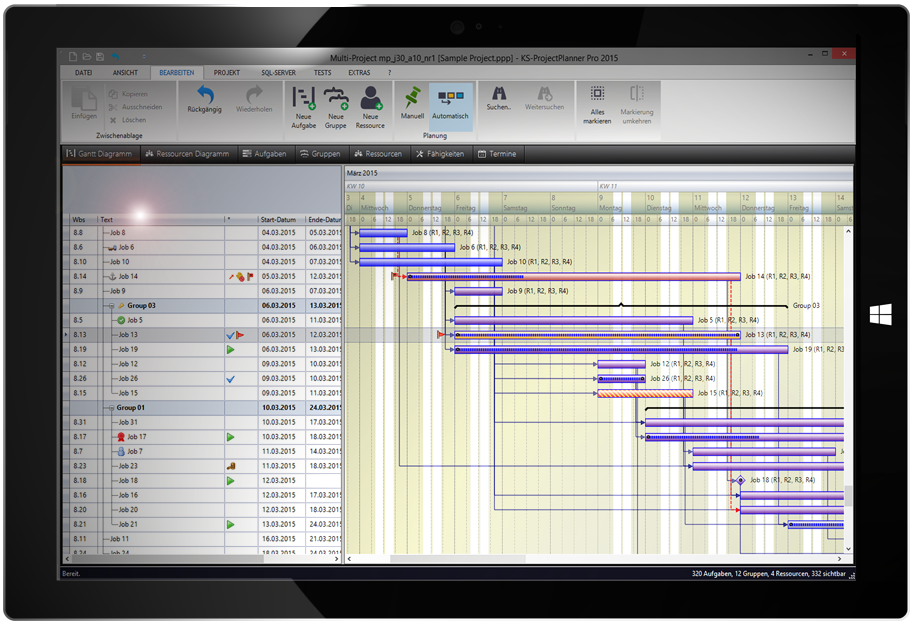 Project management can be real fun, when using a good software,

.. once apart from the enormous benefits that you will gain by using such a software. Adding new tasks by double-click is more intuitive and smoother than typing them into a calendar or spreadsheed application. You can also specify constraints and dependencies to other tasks and define the availability and cost of resources. With every change, the software gives you immediate feedback and shows the impact on the project plan. You'll always have the project and the costs under full control. And all this is so incredibly useful, that you shouldn't renounce.

by the quick and fluid work flow of this program.

prevents your project from running out of the rudder.

Once your project is running, the program takes account of status and progression of tasks.

Working in a team

Projects can be optionally managed on a SQL Server.

The Art of Project Planning

When an artist paints a picture, he starts with a big brush and puts the gross forms. In the following steps, he refines the painting and goes more and more into the details, until he finally puts the finishing highlights with a fine hair brush. So he works from coarse to fine.

This is the way how you should also proceed in project planning:
From coarse to fine.

Start with a long task bar that extends over the entire project duration. Then right-click->Break down.. to subdivide this into finer tasks. Again break these tasks down to more detailed tasks, etc. This way you can create even a large projects quite quickly in it’s basic structure. Rename the newly created tasks and groups directly in the data-table.

With this basic structure, the program has also added dependencies all around with the tasks. Check these and add more dependencies where required.

Now you can begin to set the estimated duration for all tasks, by dragging them at their right border with the mouse. You can use the ASAP function from the main menu to align all tasks (or just the selected) to the left, which is as soon as possible.

Add some milestones to the project, which act like stage wins in a bicycle race, and make following tasks to depend on them. You can fix those milestones by setting their earliest and latest start date in the task dialog (double click to open). This way you can bind the entire project flow to these corner posts, without fixing all other tasks.

Also think, which tasks could run independently in parallel (at the same time). In the ideal case you’ll have planned some continuous strings from project start to it’s end. You should also add two more milestones at the project’s start and end. You shouldn’t fix the project end, unless it’s not a deadline, which must never be exceeded.

Now you can start assigning resources to all tasks, except for the milestones.

Until now you have been in the planning stage. But in the moment, when you set the first task into ‘running’ state, the entire project definitely has begun and is now in tracking mode.

The program reports this important step and add’s a first project baseline, which is a current snap shot, and which can later be compared with the actual flow. You can add more baselines at any time.

Being the project manager, it’s your job to adjust all tasks and make them fit with reality. Some tasks may last longer than they were planned. Follow up tasks will shift forward automatically, due to their dependencies, and you can see the impact on the project plan and it’s costs immediately.

Now you can’t no longer move any tasks that already have begun, as you did during planning. They will instead start to split at their current point of progress. Tasks which are completed or cancelled can’t be moved at all, because they have to stay at their position to keep records of their performed work and costs.

Critical paths are marked in red. You should keep an eye on them, because a delay on the critical path will affect the total project length. Other paths that run in parallel, may be less critical.

The way how you meet the milestones at their planned date can be a measurement for your success. But you shouldn’t plan the project too tight, and rather add some buffers, so that you finally have some breath for sudden incidents.

Celebrate your success as the project manager together with the team and the customer. A typical milestone in the building craft is a roofing ceremony.

The basis for successful planning remains in your own human experience. This is something that can’t be substituted by a software. And by analyzing completed projects and their baselines, you can extend this experience constantly.

Built for the Windows Desktop

Supports Windows Vista up to the latest Windows 10

If you've never worked with this software before,
or if you want to learn more, please visit the online-help page.

In the first releases, KS-ProjectPlanner was published as a freeware. There have been many downloads and user requests for more features. Many of the requested features are now realized in the Pro Version, which is promoted here. The screenshots show the essential innovations.

The program has also become much more powerful. Where the freeware version could handle hundreds of tasks fluently, the Pro version can do it with thousands. This was achieved by many optimizations and the implementation of sophisticated data structures. Some core calculations have been speeded up by the factor of one hundred. 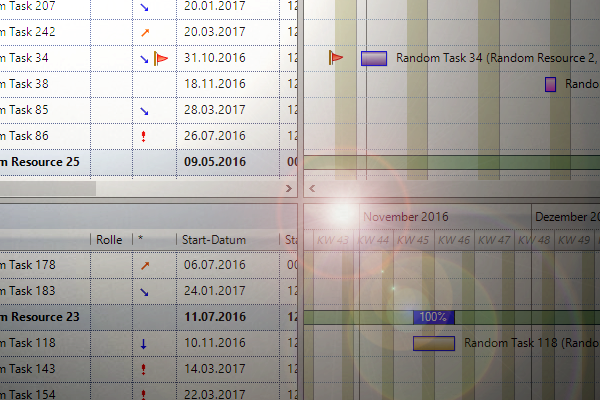 Split-views are an important feature for a project management software, especial... 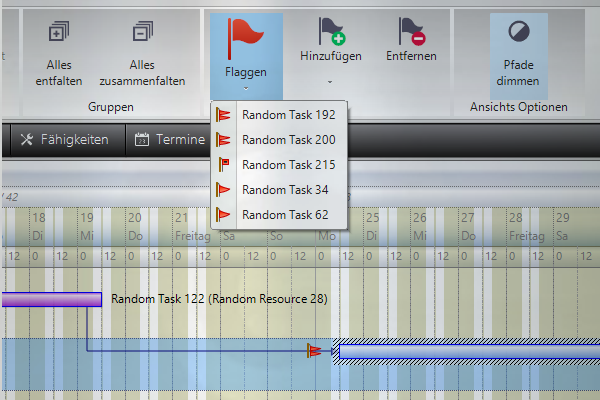 The new flags feature simplifies navigation in large projects. So does the free ... 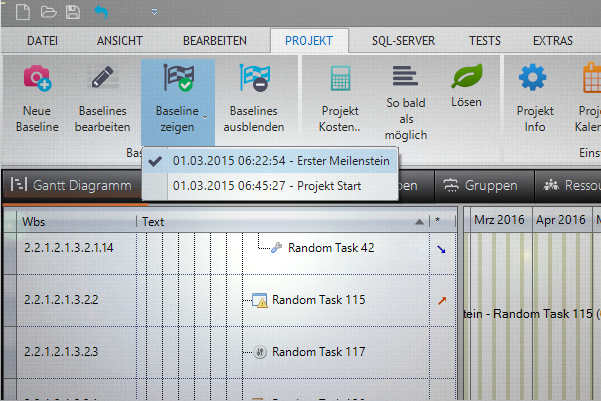 The current version of the plan can be saved to a new 'project baseline'. When t... 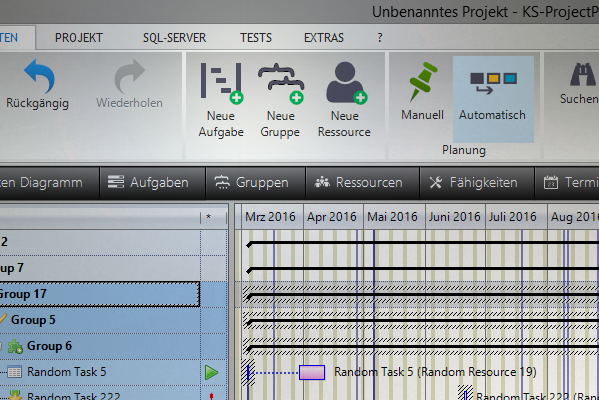 Optimized to work with tablet computers 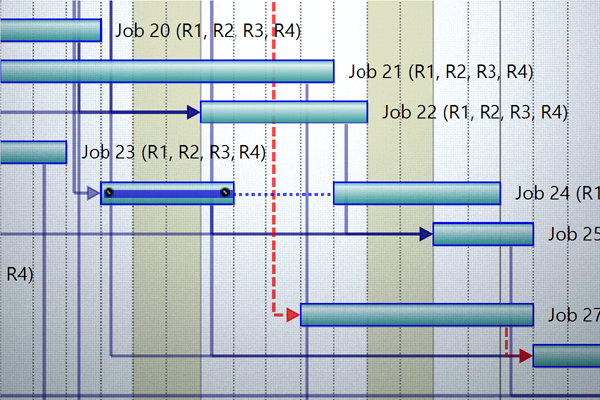 When starting the first task, the projects changes to tracking mode. Running tas... 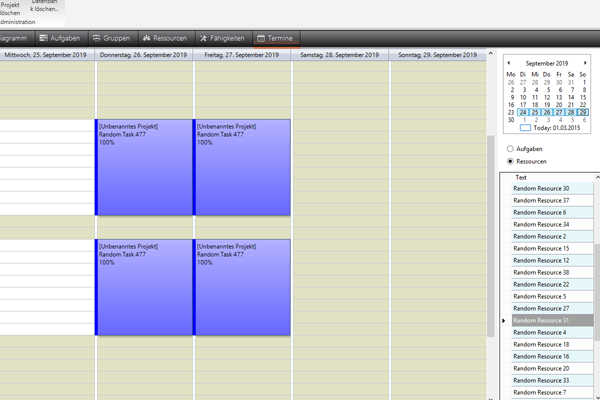 Calendars per Task or Resource

The calendar view shows individual calendars for a task or a resource.... 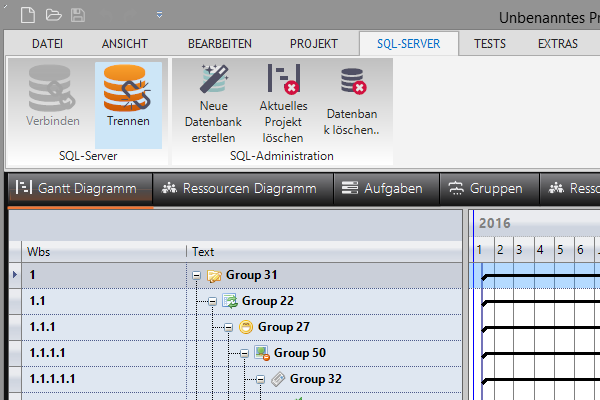 Projects can be saved to files or to a MS-SQL Server. Resources and calendars ar... 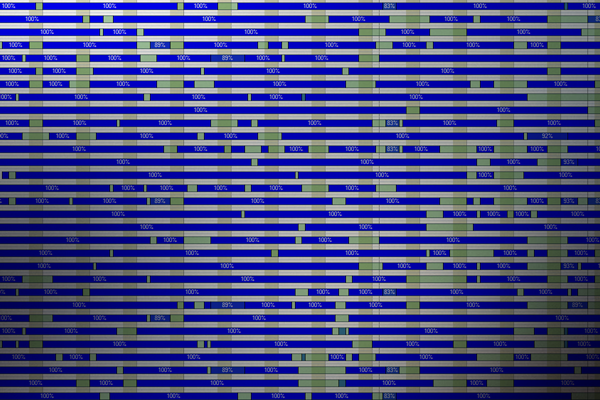 In this screenshot, the program found a very compact plan for a large project. T... 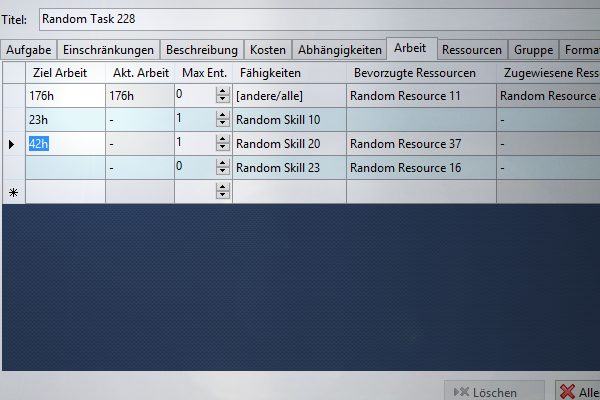 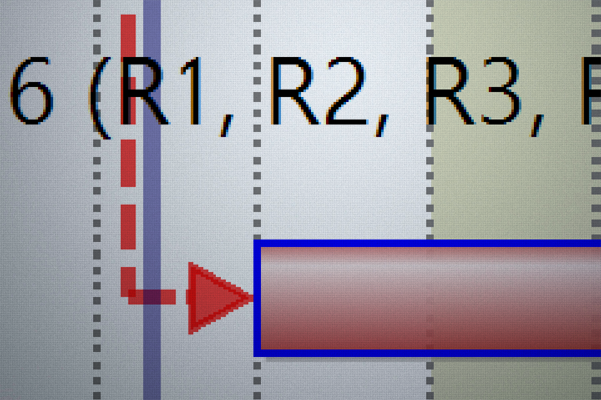 The program renders accurate and with high speed. The Pro Version can print in t... 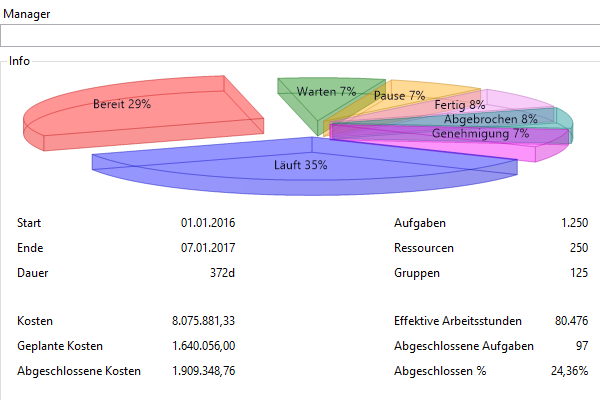 This screenshot clearly shows a big benefit, which a project management software... 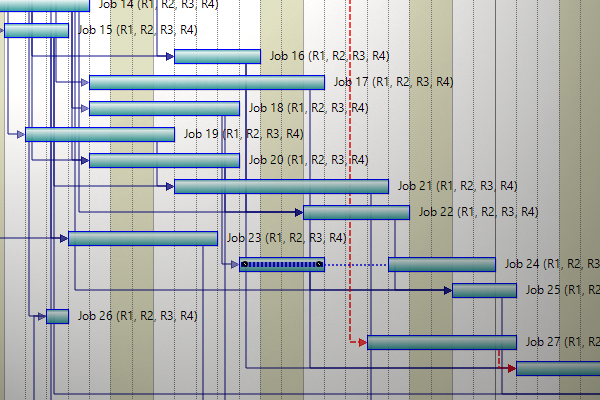 The program can calculate very complex plans with ease....

A goal without a plan is just a wish.

Plans are of little importance, but planning is essential.

Failing to plan is planning to fail.

The beginning is the most important part of the work.

One step at a time is good walking.

It is a bad plan that admits of no modification.

All prices are net amounts in EURO. For Swiss customers they are currently the same in Swiss Francs (add. 7,7% Swiss VAT), when ordering directly from Kroll-Software. All prices are a one time license fee without further obligations, no automatic subscription, no automatic renewal, or the like.

The order buttons link to the reseller ShareIt! Digital River in Germany. Companies from the EU and Switzerland can also order directly from Kroll-Software by invoice/bank transfer.

The Enterprise license is valid for an unlimited number of users at a single business location, or 25 users worldwide.

Day 2 of the Royal Week of Service : ✅ Today, the Royal Court and members of the student body participated in a service project by repainting portions of the patio located at the Student Union! Thank you so much to the Facilities Management for letting us be of service 💙! pic.twitter.com/qZ5isciNYY

Empowering the next generation of change-makers to drive impactful & sustainable initiatives is critical in shaping the future. Through the DDA Project funded by @USAIDTanzania, we recently conducted Leadership & Management training for 26 leaders of youth-led CSOs. #Tanzania pic.twitter.com/EHN55woOy3

Please write a message to Kroll-Software.

This website uses cookies to improve your experience while you navigate through the website. Out of these, the cookies that are categorized as necessary are stored on your browser as they are essential for the working of basic functionalities of the website. We also use third-party cookies that help us analyze and understand how you use this website. These cookies will be stored in your browser only with your consent. You also have the option to opt-out of these cookies. But opting out of some of these cookies may affect your browsing experience.
Necessary Always Enabled
Necessary cookies are absolutely essential for the website to function properly. This category only includes cookies that ensures basic functionalities and security features of the website. These cookies do not store any personal information.
Non-necessary
Any cookies that may not be particularly necessary for the website to function and is used specifically to collect user personal data via analytics, ads, other embedded contents are termed as non-necessary cookies. It is mandatory to procure user consent prior to running these cookies on your website.
SAVE & ACCEPT